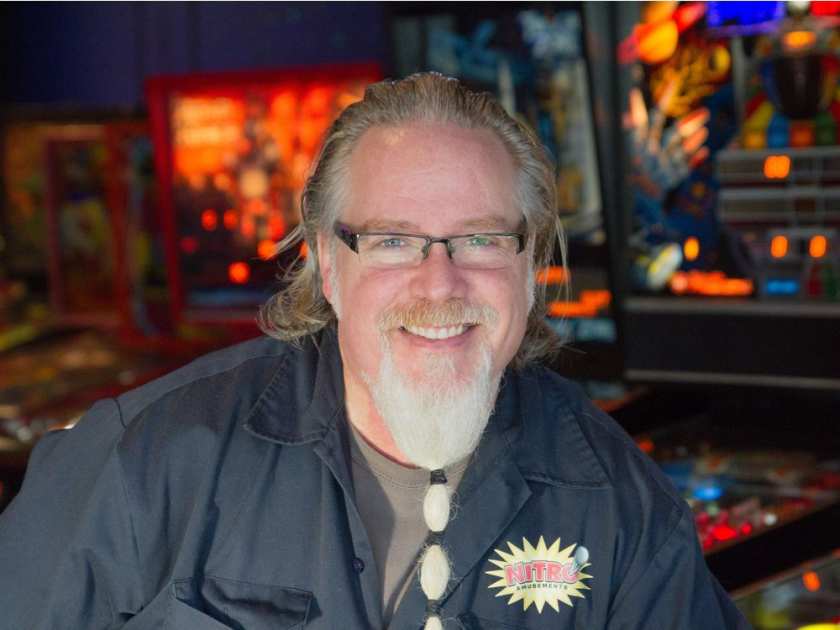 As The Who sang, “He’s a pinball wizard; that has to be a twist.”

The 1968 song, Pinball Wizard, is a centrepiece of the band’s rock opera, Tommy.

That should have rung a bell with another Tommy — Tommy Floyd — but he wouldn’t become a pinball wizard until six years later.

“I played my first pin in 1974 at a pool hall in Powell River,” remembers Floyd. “I was 10 years old and was hooked instantly. I can still hear the chimes and sound of the ball knocker like it was yesterday.”

Floyd has a pinball showroom, Nitro Pinball, in Mission and is the organizer of the Vancouver FlipOut Pinball Expo. This might be a logical transition from his years as an erstwhile rock singer, hanging out in the hall of a recording studio playing pinball until it was time to record a take.

“I remember seeing the Tommy movie in the Patricia Theatre in Grade 5 and was absolutely blown away,” Floyd said. “Especially the Elton John character. I also thought it was outstanding that the hero was deaf, dumb and blind. Also, many recording studios kept pinball machines in the hallway, so musicians would have a distraction and could pass the time. No doubt a few of them became good.”

Rock ‘n’ roll and pinball has a strong connection. It isn’t surprising that the first band to market its own pinball machine is KISS as KISS’s Gene Simmons is a relentless promoter of anything that might have KISS potential. Other acts, though, have also lent their names to the game.

“Well, one of my favourite’s is Nugent (Ted Nugent),” notes Floyd. “Love the game, the back glass and shooter-lane shot. I wouldn’t have expected he’d come out with a pinball machine. However, newer pins like AC/DC, Metallica and even Guns N’ Roses from the ’90s are a welcome upgrade from the older machines like Bally’s KISS or Rolling Stones from the late ’70s. They now have full songs, and band call-outs missing from the earlier titles.”

Floyd fronted a variety of rock bands from 1979 to 1994. When I’d run into him, he was either just back from a tour or about to go on the road. His bands didn’t seem to play Vancouver much and left few traces of their viability. But Floyd made records of the mainstream rock/big-hair variety and learned the music business. He had his own recording label, went into management, but gradually made a move to pinball that seems logical now.

“I started out like most playing in cover bands while writing on the side,” he explains. “Once I had enough material to go original, I made the transition and never looked back. I enjoyed performing and touring most. I always found the studio somewhat boring. That is, unless there was a pinball machine somewhere.

“In 1995, I launched a record label — Outlaw Recordings,” Floyd continues. We released hard rock and metal bands. The rock scene in North America sucked at the time, so I spent a lot of time in Europe touring the bands and licensing them overseas.

“Interestingly enough, pinball was pretty dead domestically as well. However,  as with most things abroad, fans of music and collectors of things Americana are loyal. This included pinball. Lot’s of machines to play in every city and country we travelled. It was like treasure hunting for pinball. In 2005, after our 10th anniversary at Outlaw, I retired the label imprint.”

” After retiring from the music business, it was actually the first time in 25 years that I wasn’t preoccupied with writing, recording, or music management of another artist. I immediately wanted to do what I always loved doing in between all of the other stuff — play pinball!”

Floyd has seen dramatic changes in the games since he first bought them used in the States.

“Now it’s on a resurgence. Companies like Sternare releasing the best pinball machines in the history of the company. Fast, and ultra-modern gameplay from legendary designers like Steve Ritchie, John Borg and John Trudeau. While new companies like Jersey Jack Pinball, Heighway and Dutch Pinball are breaking ground with different designs and formats, it’s once again an exciting time for pinball.”

From his vantage point, the relationship between playing rock ‘n’ roll and playing pinball makes sense.

“There are many parallels between pinball and rock ‘n’ roll. It’s always been there, just below the surface,” he says. “There’s many musicians that are complete pinheads! I mean that in a good way. One of my pals from the local music scene, Billy Hopeless (a.k.a. Billy Bonito),  is a regular at tournaments and downtown locations like Pub 340 and Landyachtz Arcade. He’s already signed up for Vancouver FlipOut Pinball Expo in September,  as have more than 100 others and the event is still three months away. I know Ed Robertson (of Barenaked Ladies) is heavily into pinball and recently named their new album ‘Silverball.’ That speaks volumes.”