Vancouver flips out for pinball 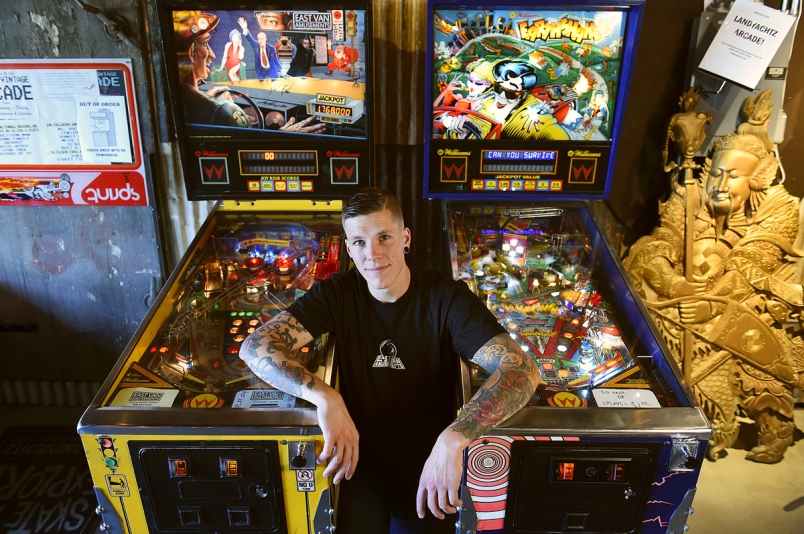 When it came time to walk away from three decades in the music business, Tommy Floyd wanted to retain at least some of the aspects of life in the fast lane: the lights, the sounds and feelings of euphoria.

So naturally, the 52-year-old devoted himself to all things pinball.

While the similarities may be difficult to pinpoint at first, the parallels are there in abundance.

“I was drawn to the music business because I loved the angst, I loved the rebellion and I loved touring and travelling,” Floyd said. “There’s a similarity with pinball with the excitement and the thrill when you’re playing live. To me the two aren’t really that far removed from one another.”

Floyd spent much of the ’80s, ’90s and early 2000s playing in local hard rock and metal bands, including the Canadian version of Pretty Boy Floyd, before turning his focus to the management side of the business.

He left music a decade ago and devoted himself entirely to pinball: buying machines, organizing tournaments and selling the activity across western Canada.

Now, Floyd is organizing this weekend’s inaugural Vancouver FlipOut Pinball Expo at the Holiday Inn on Howe Street. Running Sept. 23 to 25, the event will feature more than 100 pinball machines, speakers and vendors.

Competitive tournaments will also be in the offing and a prize purse of $10,000 is up for grabs for those with serious pinball panache.

The upcoming expo is loosely based off of pinball leagues and other shows Floyd has staged in the Fraser Valley, but on a larger scale.

The Mission resident is cognizant of the stereotypes associated with arcade and gaming culture when asked what type of special nerd would line up and pay to play pinball for keeps.

But as it turns out, the geeks have long left town and playing pinball is once again righteous.

“It’s not going to be a ‘guy fest,’ the female contingent of the show will be right up there with the males this weekend,” he said. “For most of the guys, their wives and girlfriends get involved. We’ve got a lot of females who come simply because they want to kick some ass in the tournament.”

Jeff Radomsky is proof positive of the fact pinball’s got its swagger back. The 26-year-old serves as the operations manager and event coordinator at Landyachtz, a company that traditionally concerns itself with skateboards, longboards and the like.

Radomsky helped the Union Street facility stage its first “pop-up arcade” night as a trial run right around this time last year — all of the storefront merchandise was moved to make way for pinball machines, arcade games and a night of gaming culture.

The kids went wild for the concept and similar events are now routinely staged once every few months.

As is the case with most cycles in pop culture, what was considered lame 25 years ago is now the hottest thing since sunburn.

“The era in which pinball machines were being widely produced and were extremely popular, in the late ’80s and early ’90s, that’s the big throwback culture that’s happening right now,” Radomsky said. “Anything that’s classic and old is cool and we’re now finally at that era where that is classic and old.”

Given his experience in gaming culture, Radomsky is one of a handful of guest speakers at this weekend’s expo. He’ll be flanked by other international luminaries from across the U.S. and Europe who will speak to pinball’s resurgence.

“Pinball has definitely become a lot more popular in mainstream culture here in Vancouver over the last couple of years,” Radomsky said. “It’s very strongly connected towards tangibility — people like using a wooden box full of gears to bounce a metal ball around because there’s something a little bit humbling about that. It also forces social constructs in a way that online gaming and other video games don’t offer.”

For tickets and more details, go to vancouverflipout.com.